Good mothers are expected to be selfless. Artists are seen as selfish. So what does this mean for a mother with artistic ambitions? Enter: frustrated poet Veda Gray, who is offered a Faustian bargain when a wealthy childless couple, the Parishes, invite her to exchange her young son Owen for time to write. Veda’s story unfolds as an adult Owen reflects on his boyhood in the Melbourne suburbs, and in the vibrant bohemian inner-city art world where his restaurateur father was a king. Meanwhile, the talented women in his orbit – Veda, Mrs Parish, wife of an influential poet, muralist and restaurant worker Rosa – push against gender expectations to be recognised as legitimate artists, by their intimates and the wider world.  And almost-aunt Ornella, who declares herself without an artistic bone in her body, is perhaps the closest thing Owen has to a traditional mother. As Owen is encouraged to ‘be a man’, he loses something of himself, too. Blending wit and pathos, love and fury, ambition and loss, this is an extraordinary novel of love and art, set in the Melbourne milieu of Georges and Mirka Mora, Joy Hester, and John and Sunday Reed. 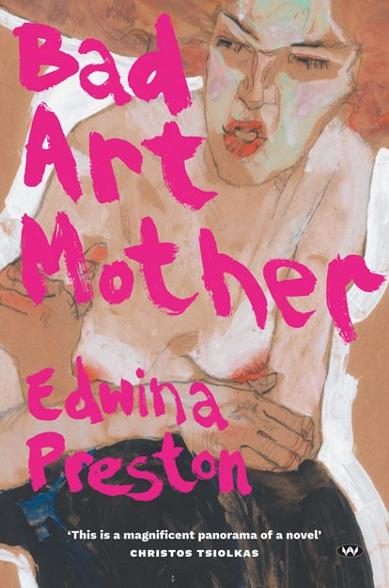 "I adore Edwina Preston’s Bad Art Mother. This is a magnificent panorama of a novel, written with an assured verve, that encompasses art and feminism, love and marriage, and makes us believe we are right there, at the very heart of a transformative moment in culture when everything is about to change. There is anger here, as there must be when telling the story of how women have been silenced in the world - but there is also a scrupulous empathy for every character: this is a humane and tender work. The conception is daring, yet Preston has the confidence and talent and assuredness as a writer to never stumble in the storytelling. I was never less than enthralled..." – Christos Tsiolkas

"With commanding prose, imaginative energy and fierce wit, Preston tells the lives of women artists. The focus is Veda Gray, whose confronting presence, desperate stratagems and passionate engagement with her creativity offers an intense and memorable portrait." – Janine Burke